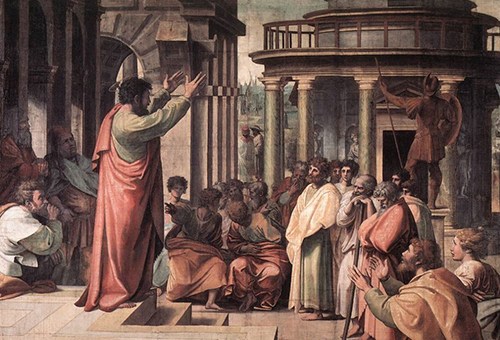 “For this reason I have sent Timothy to you, who is my beloved and faithful son in the Lord, who will remind you of my ways in Christ, as I teach everywhere in every church. Now some are puffed up, as though I were not coming to you. But I will come to you shortly, if the Lord wills, and I will know, not the word of those who are puffed up, but the power. For the kingdom of God is not in word but in power.” (‭‭I Corinthians‬ ‭4:17-20‬, ‭NKJV‬‬)

Paul states that, by the power of the Spirit, he would be able to discern the words of those puffed up.  Today, some pastors tend to puff themselves up with titles and degrees, as well as the adoring accolades of pacified parishoners, and forsake the diligent pursuit of Holy Spirit power.  Paul knew that this power was the only way the Corinthian church could withstand the Hellenistic heresies and satanic forces at work in the community around them, and he would issue the same advice to the modern church.

So, fellow believer, what are you doing in your personal spiritual life to cultivate this power that only comes from the daily reliance on the Spirit of God?  We must determine to walk this daily road called life according to the Spirt instead of the flesh (Romans 8:1, NKJV) and to “put on the whole armor of God, that [we] may be able to stand against the wiles of the devil” (Ephesians 6:11, NKJV). Through these disciplined habits, the discernment mentioned by Paul would be manifest in our own lives and churches.

3 thoughts on “Pursuing the Power”